Ambassador KIKUTA shares the views with Prime Minister Deuba for strengthening the bilateral relationship between Japan and Nepal (July 22, 2021) 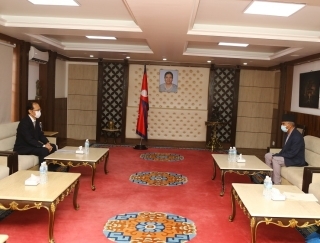 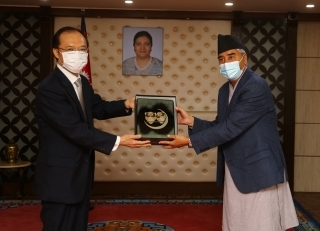 Ambassador Kikuta and Prime Minister Deuba shared the views on bilateral relations between the two countries, as the year 2022 commemorates the 120th anniversary of student-exchanges, moreover, the post-COVID social and economic development of Nepal. Ambassador Kikuta mentioned that Japan has been working with Nepal as a friendly development partner to improve the daily lives of Nepali people, which will be also beneficial for the public health of the country in this COVID-19 situation. The recent donation of about 1.6 million AstraZeneca vaccine for Nepal by COVAX facility is a reflection of long time friendship of Nepal toward Japan, followed by the medical equipment assistance for the Nepali hospitals to fight against the pandemic together. Prime Minister Deuba expressed his appreciation for Japan’s cooperation including the vaccine donation.

Ambassador Kikuta highlighted the special intimacy between Japan and Nepal based on our long-term relationship, he hoped to continue the great partnership for more years to come by resuming the people-to-people exchange of two countries once the COVID-19 situation will be eased.