Since the 2015 Gorkha Earthquake, the Government of Japan has been supporting the post-earthquake recovery and reconstruction in Nepal. At “The International Conference on Nepal’s Reconstruction,” which was held in Kathmandu on June 25th, 2015, the Government of Japan pledged to assist recovery with 32 billion Japanese Yen (equivalent to approximately 35 billion Nepalese Rupees). Because the earthquake severely damaged a number of schools and classrooms, putting teachers and students in a difficult environment to manage their daily classes, Japan launched the “Emergency School Reconstruction Project (ESRP)” as a part of Japan’s pledged assistance at the conference. ESRP originally aimed at the reconstruction of 236 schools with 15 billion Nepalese Rupees, but later 38 schools were added to the project, thus 274 schools in total will be reconstructed by November 2022. Moreover, ESRP aims to rebuild and refurbish schools under the concept of "Build Back Better," improving both education services and earthquake resilience, to achieve the sustainable socio-economic growth of Nepali society.

Taking this opportunity, I would like to express my respects to the head teacher, the School Management Committee, teachers, and students of this school. Namuna Machhindra Secondary School is the only school which is an education institute for visually impaired students under the ESRP. In addition to the "Build Back Better," Japan also considers the importance of the concept of inclusive education and "Child, Gender and Disabled (CGD) Friendly." We worked for the reconstruction of this school with the hope that it would be comfortable for differently-abled students. The new school building and the dormitory are arranged with reduced steps, braille blocks and handrails to make students feel at ease during their studies and school lives. Additionally, the new dormitory for visually impaired students has a motif of cherry blossoms, which reflects the friendship and goodwill from Japan to Nepal.

I am very pleased to support the reconstruction of this school to make a better future for students, with the traditional Japanese spirit of caring for others called “Omoiyari.”

Unfortunately, there are still difficulties caused by COVID-19 and it seems conducting face-to-face classes at schools will not be not straightforward. I hope that school officials, parents and students will be able to enjoy their healthy school lives at the earliest in this new school building. This new building will provide a safe environment that allows students to concentrate comfortably on their studies.  Moreover, the school can also be used as an evacuation shelter for the community people when they are affected by a natural disaster.

With regards to COVID-19, the Government of Japan donated about 1.6 million doses of Japanese-made AstraZeneca vaccine to Nepal last month. This too is a demonstration of the relationship between our two countries.

Finally, I wish that the ESRP schools will further strengthen the relationship between Japan and Nepal, and the friendship between the peoples of the two countries for the future generations. 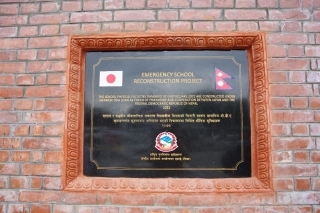 PRESS RELEASE
Embassy of Japan
P.O. Box 264, Kathmandu
http://www.np.emb-japan.go.jp
JEINF No.36-2021
September 15, 2021
Japan Assisted the Reconstruction of Namuna Machhindra Secondary School
(Kathmandu, September 15): The Handover Ceremony of the reconstructed Namuna Machhindra Secondary School took place in Lagankhel, Lalitpur District on September 15. The school was severely damaged by the 2015 Gorkha Earthquake, but it is now reconstructed under the Emergency School Reconstruction Project (ESRP), which is a Japan assisted project to reconstruct 274 schools by November 2022. The Government of Japan is pleased with the completion of the reconstructed school, as we have been supporting a better education environment for young Nepali students with the ESRP.

On behalf of the Government of Japan and JICA, H.E. Ambassador of Japan to Nepal, Mr. KIKUTA Yutaka sent his congratulatory message to the Government of Nepal and all the people who have made contributions under the ESRP, in particular, the team of Namuna Machhindra Secondary School.  The Ambassador pointed out that this school has a facility for visually impaired students, thus reconstructed with a "Child, Gender and Disabled (CGD) friendly" concept called “Omoiyari” (Japanese spirit of caring others), being equipped with such facilities as reduced steps, braille blocks and handrails. H.E. Kikuta continued by expressing his hopes that all students can enjoy their school lives in a healthy and safe environment. 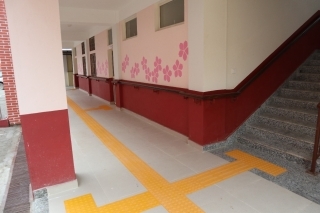